On February 1st, Dr. Marc Garcia-Borràs started his new Beatriu de Pinós project (MSCA COFUND) entitled “Computational characterization of enzymatic reactive intermediates for the discovery and design of new biocatalytic activities”. This 3-year project will allow Dr. Garcia-Borràs to work as an independent researcher at the Institute of Computational Chemistry and Catalysis (IQCC) and the Department of Chemistry, starting and leading a new research project in the IQCC devoted to the study and characterization of reactive intermediates formed over the course of enzyme catalytic pathways.

The main objective of the project is to develop new computational protocols for the characterization of biocatalytic reactive intermediates, and to set up a new wet lab to perform experiments to validate the computational predictions. Both computations and experiments will be performed in-house by Marc and his team and collaborators. Additionally, the Beatriu de Pinós project will allow Dr. Garcia-Borràs to visit other institutions in different planned secondments, to continue with his training in transversal skills and to consolidate his international collaborations, leadership, and scientific independence.

Enzymes are highly efficient biocatalysts, biodegradable, operate under biological conditions, and can offer kcat/kuncat accelerations of several orders of magnitude. However, only few processes have a natural enzyme to accelerate the corresponding chemical reactions. Consequently, the design of new specific enzymes for catalyzing non-natural reactions is highly attractive. Among other strategies, this can be achieved by taking advantage of the intrinsic catalytic promiscuity that natural enzymes exhibit and by introducing specific amino acid changes (i.e. mutations) into their sequences. Catalytic promiscuity refers to the ability of an enzyme to catalyze, in addition to its native function, reactions involving different substrates and that proceed via different transition states and different reaction pathways.

Enzymatic reactive intermediates are species involved in biocatalytic cycles that are not so stable and exhibit short lifetimes. These species are sometimes found to be the source of enzyme catalytic promiscuity, since different potential reaction pathways can diverge from these generated species. Consequently, controlling the behavior of such reactive species could provide a new route to access to new non-natural biocatalytic functions.

In this project new computational protocols to study and characterize reactive intermediates formed over the course of enzyme catalytic pathways will be developed. The new protocol will rely on different multiscale computational approaches that will be combined to account for different factors that interplay key roles on the formation and stabilization of enzymatic reactive intermediates.

In addition to that, experimental work in the molecular biology lab together with structural chemical characterization of the product outcomes of the biocatalytic transformations will be carried out to validate the computational predictions and provide further guidance for computational modelling.

Finally, the knowledge acquired will be used to computationally design and engineer new enzyme variants to access to new-to-nature reactions, in a more rational and efficient manner. 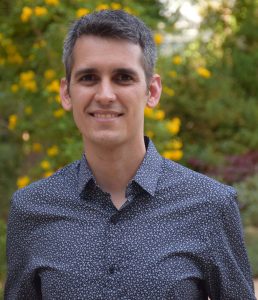 After studying Chemistry at the UdG (2006-2010, obtaining the Extraordinary Bachelor Award 2010), he coursed the Master in Theoretical and Computational Chemistry (QTC, coordinated by Universitat Rovira i Virgili URV), being awarded the Extraordinary Master Award. After that, he started his PhD in Chemistry (2011-2015, beca FPU) at the IQCC under the supervision of Prof. Miquel Solà and Dr. Josep M. Luis, working on the computational study of the structure and reactivity of fullerenes and endohedral (metallo)-fullerenes. He also worked on the development and application of new theoretical tools for the evaluation of non-linear optical properties (NLOP). During his PhD he visited the research groups of Prof. K.N. Houk (UCLA, USA, 3 months in 2014) and Prof. W. Thiel (Max Planck Institute, Germany, 2 months in 2015). He obtained the 2015 Extraordinary PhD Thesis Award for the best PhD Thesis in Chemistry. Upon graduation, Marc did a postdoctoral stay (6 months) in the group of Dr. Sílvia Osuna at UdG.

In January 2016 Dr. Garcia-Borràs joined the group of Prof. K. N. Houk at UCLA as a postdoctoral researcher for a total of 3 years. He was awarded a Ramón Areces Postdoctoral Fellowship (2 years) to support his research project “Multiscale Modelling Strategies for designing Functional Redox (Metallo)enzymes” at Prof. Houk’s lab (PI: Garcia-Borràs). During his postdoc with Houk, Marc worked on the application of computational tools to understand important (bio-)catalytic processes. He has collaborated with world-leading groups in the biocatalysis and directed evolution of proteins fields including the groups of Prof. Frances Arnold (Caltech), Prof. Manfred Reetz (Max-Planck-Institute), Prof. David Sherman (U. Michigan), among others.

In February 2019 Marc moved back to Spain as a recipient of a Juan de la Cierva – Incorporación Fellowship, that allowed him to start his independent career as a junior researcher at the IQCC (UdG).

Dr. Garcia-Borràs has published 51 papers (48 in Q1, + 2 book chapters) in top Chemistry and Multidisciplinary Sciences journals, and he has contributed to more than 78 national and international conferences as coauthor, being presenting author of 6 invited talks and 16 oral communications.

[see here for a PDF version of this news item]